Ask anyone from outside the area what they picture when they think of New Orleans, and chances are their answer will have something to do with crazy parties on Bourbon Street. I think this is unfortunate because, for me, Bourbon Street is the least interesting part of the city. Of course, when visiting New Orleans, you have to experience Bourbon, and it’s not unlikely that you will leave there with a great story or two, but to really get a feel for the charm and culture of New Orleans, you have to branch out.

My two favorite streets in the French Quarter are Chartres, where you can dine at K-Paul’s Louisiana Kitchen, browse in some cute boutiques, and catch a glimpse of St. Louis Cathedral, and Royal Street, an art and antique lover’s paradise with amazing shops and some fantastic little street bands, including my favorite duo, Tanya and Dorise.

I’ve spent a great deal of time on Royal, but until a few days ago, I had never experienced the Royal Street Stroll, an event that brings together wines from all over the world, some great New Orleans food, jazz music, and, of course, a parade…because nothing in New Orleans is complete without one. My friend Tiffoney and I decided to go, as our husbands were both occupied with other things. At $89 per ticket in advance, and $109 at the gate, it’s not an inexpensive event, but the price of entry gets you a wine glass and all the wine samples and food you care to consume.

We arrived when the event began at 5:30, with our tickets in hand. Although it did move quickly, the line for wristbands was incredibly long, which allowed some time for people-watching. One of my favorite things about New Orleans is the bizarre mix of people that you encounter when you’re there, and I immediately noticed while waiting that this crowd was different…different in that we were all kind of the same, that is. While that is the norm on the Northshore where I live, it was a little surprising to me in a city where weird is, well, normal. I missed the weird.

Once we were in and wearing our official bracelets, we made our way down Royal, taking advantage of the fans we were given, which not only served as a map for food and beverage stops, but also helped cool us off on this warm, sticky, South Louisiana night. We sampled several wines and checked out some local art…we even met Michael Mondavi, who was pouring samples of his wine. The lines for wine were fairly short, however, the majority of the food lines were quite long…a dangerous combination. 🙂 Because of this, we missed out on some of the more popular food items but still found some great stuff without enduring long waits.

While the wine was good, and the food that we did consume was tasty, the highlight for this parade lover was the Krewe of Cork. Decked out in wine and grape costumes, they paraded alongside a jazz band, handing out wine-themed beads and other assorted goodies. The parade route was short, with members basically walking down Royal Street, then meandering back up again. We even heard one krewe member ask someone if he could have his beads back so he would have something to throw when they turned around! The parade was cute and low-key, and everyone in attendance seemed to enjoy the fun.

The stroll was over at 8:30, although attendees could stick around for as long as they wanted to after it ended. There would just be no more “freebies.” As someone who looks for any excuse to hang out in the city, I found this to be a very enjoyable way to spend a Thursday evening. I showed some restraint and didn’t buy any artwork, and I was home early enough that my 4:30 a.m. alarm was no more painful than the roundhouse kick to the ribs it normally is on a Friday.

While the Royal Street Stroll won’t be back until next May, there are always plenty of things to do in this quaint and beautiful area of the Quarter. If you come to town, make sure you spend some time exploring the galleries and antique shops on Royal and getting to know some of the local artists. And don’t worry…if you have a hankering for a hurricane, an offensive t-shirt, or bad karaoke, Bourbon Street will still be there when you’re done. 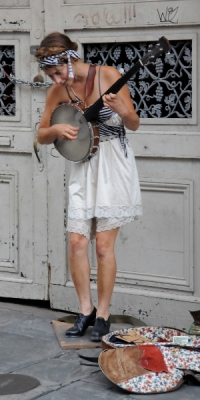 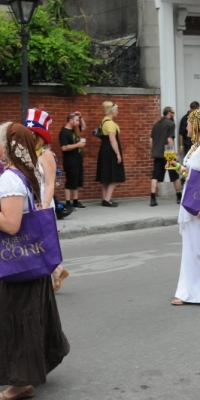 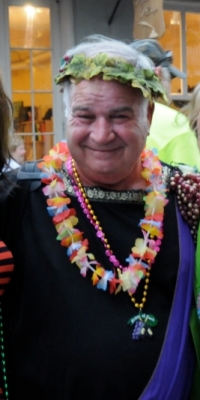 Post-Fest Blues
A Look Back at Katrina