By Julie Clements on September 14, 2013 in New Orleans Life

Steve Gleason is a hero. No doubt about it. No true Saints fan will ever forget his blocked punt in 2006, when the Saints returned to the Dome for the first time post-Katrina. A year after the storm, we were still more than a little broken, but in those few seconds it took #37 to get his hands on the ball, New Orleans was rejuvenated. I will never forget watching that game unfold, alone in my kitchen in my Joe Horn jersey. Brett was out of town, and the kids were too young to understand the significance of the game or care about football, so I jumped up and down, whooped it up, and just basically made a fool out of myself…all by myself. And I didn’t care. The game was magical, and Steve Gleason forever secured a spot in Saints fans’ hearts. (If you haven’t seen the sculpture depicting the blocked punt outside the Dome, check it out.) And I know football isn’t life, but for that one night, for a battle scarred WhoDat Nation, it was. And I continue to get chills and a pretty significant lump in my throat when I watch the video.

We were a city, really an entire region, that needed a hero, and Steve Gleason had a big red “S” on his chest. He still wears that “S” seven years later…it’s just a size or two smaller.

Since his ALS diagnosis in early 2011, Steve has been the poster boy for living life to the fullest. With his “No White Flags” approach to life, he continues to travel the world and make appearances for his charitable organization Team Gleason, even though he is wheelchair-bound and uses eye-tracking software to communicate. As inspirational as he was in black and gold, he is even more so today. He has brought awareness to a devastating disease that had not previously received the attention it deserved. He is ALS’s pink ribbon.

My initial reaction when I began seeing Steve’s physical changes when he would appear on tv, or on rare occasions when I would see him out in the community, was to pity him. How cruel it seemed to have been so strong and athletic and to have had had such fame and success, only to have it all taken away. But watching him live life, really live it, has completely changed my perception. He is obviously not interested in being pitied, as one can see by watching him squeeze every last drop out of life. I saw him at Jazzfest watching the Foo Fighters in 2012. He was smiling, maybe even more than I was. He was recently in Seattle interviewing Pearl Jam. The man seriously lives. But I think the adventure that moved me the most was his recent hiking trip through the Inca Trail, eventually making his way to the top of Machu Picchu. Photos show him surrounded by his wife Michele and a group of friends who, quite literally, did all the heavy lifting. It was an amazing show of determination, but it was an even more amazing show of friendship.

I have watched Steve conquer mountains, jump out of airplanes, ride in Mardi Gras parades, and do lots of other exciting things since his diagnosis two and a half years ago, and I have thought to myself on many occasions that he’s got it all figured out. That he lives his life the way I want to live mine, making the most of each numbered day because the truth is, all of ours are numbered. Who knows…he may have more time left on this planet than I do. But I realized something else as I reflected on all of this. Maybe it’s not Steve’s lifestyle that I need to be emulating. Maybe it’s the friends of Steve Gleason that I should aspire to be more like. The Scott Fujita’s, who struggle and sweat for a friend whose body won’t cooperate, but whose mind still wants to fulfill a few more dreams. Who take time out of their lives to help a friend achieve a smile and a lasting memory. And while the red “S” on their chests may not be as obvious, it’s there. I think maybe we don’t see it because it’s stitched on their hearts.

Brett and I saw Steve pass by at Gleason Gras last weekend. He looked much thinner than the last time I had seen him, but he was there, raising money for those traveling the same road that he travels and raising awareness for a disease that deserves our complete attention. He was there in the Dome last Sunday, helping Sean Payton lead the WhoDat chant. And while I wasn’t there, I understand there weren’t many dry eyes in the place. I hope he realizes (and I’m sure he does) the impact he has made on the people of New Orleans and all over the world. I hope to be more like him…and his friends. I hope you will too. 🙂 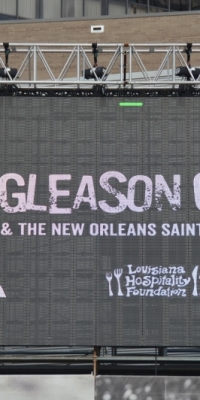 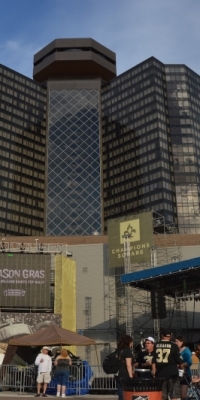 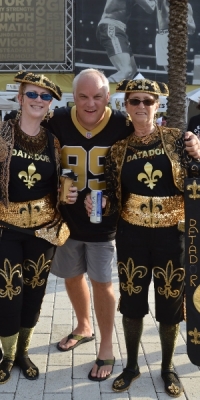 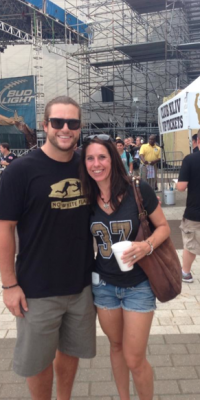