By Julie Clements on May 2, 2013 in Music Festivals 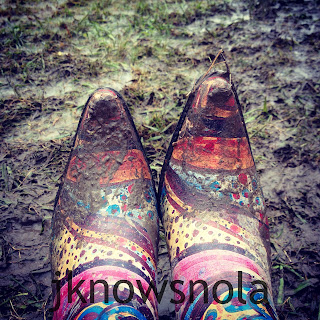 When you live in South Louisiana in early May, your two weather choices are basically hot and sunny or rainy, which can turn into hot and sunny (and steamy) in an instant. We’ve been lucky the past few Jazzfests. I really only remember one rainy day in the three years prior to this one. Sunday, however, was a different story. I had told myself I would stay home and catch up on all the things I had ignored while I was gone all day Friday and Saturday if the forecast for rain turned out to be accurate. But the music called my name, and my 15-year-old and I donned our cute rain boots, threw some trash bags in my “festival bag” in case we chose to sit, grabbed some new rain ponchos from Walgreen’s, and headed across the bridge. It was pouring when we arrived at the fairgrounds, so, forgoing fashion, we put on our yellow ponchos, even utilizing the very unattractive hoods, and headed in. The silver linings…no line at the gate and the very nice man who gave us his extra ticket, saving us $65.

The grounds were wet when we arrived…not as wet as they would be later in the day, but wet enough for us to give ourselves a good pat on the back for wearing our boots. I would guess that perhaps 10% of the crowd had on boots. The rest were wearing sneakers, flip-flops, or (gasp) nothing at all on their feet! Truthfully, if you’re wearing flip-flops, you may as well just go barefoot, and most flip-flop wearers ended up that way, with shoes sunk so deeply into the mud that they could hardly lift their feet.

We did have some sun during the middle of the day, but the rains returned just as Dave Matthews began playing. It wasn’t a rain for sissies, and it seemed to gain momentum each time he sang a hit song. The amount of mud increased, but so did the fun. I won’t lie and say we stayed until the end. We became a little cold, then a little miserable, then we just wanted to be home. We had a great rainy day, and we were glad we went, but washing off Jazzfest in a hot bath was pretty good too.

It’s supposed to rain Thursday and Friday of weekend #2. And even though Saturday and Sunday look like sunny days, the grounds are going to be a sloppy mess. Here are a few tips for those of you heading out this weekend.

Rainy Fest Do’s
Pack a poncho.
Bring trash bags or a tarp to sit on.
Bring a Ziploc bag for your cell phone
Don’t forget about sunscreen…we only had two hours of sunshine in between rains, yet we both ended up with a mild sunburn.
Bring your sunglasses for the same reason.
Invest in some boots!  *Ladies, a cute pair will make your plastic poncho a little less awful.
If you opt to not wear boots, try to find a grassy spot early in the day so you’re not standing barefoot in a mud pit.
Ignore the rain and enjoy some great music. You did pay $65, after all.


Rainy Fest Don’ts
Don’t wear white!
Don’t wring out your skirt in front of a crowd if it’s very short and you have on a thong.  Or do if you want to…it’s Jazzfest. 🙂
Don’t bring your infant! (Seems like common sense, I know.)
Don’t go in a port-o-potty barefoot! Just eew!
Don’t bust out a giant umbrella when you’re in the middle of a large crowd.
*On a related note, umbrella hats…not a good look. Don’t buy one.
Don’t assume the people around you will think kicking mud all over your friend is funny. It gets on us too, and we just think you’re kind of a jerk.
Don’t bail too early. Watching Dave Matthews play while thousands of people danced in sideways rain was really pretty darn fun.

*With regard to plastic bags over shoes…I’m not sure whether that’s a do or a don’t, but it reminds me of the kids who wore bread sacks over their shoes when I was in elementary school…and it makes me giggle a little. 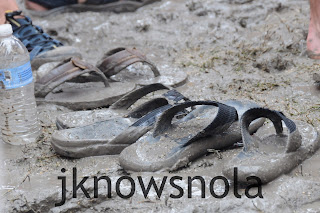 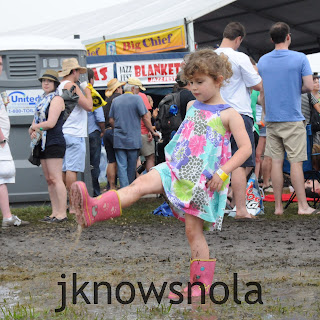 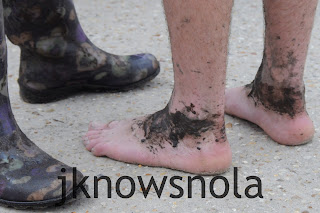 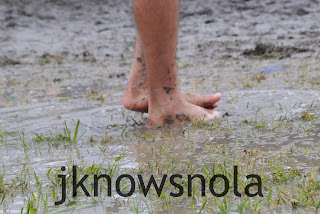