By Julie Clements on April 27, 2013 in Music Festivals

Day 1 of Jazzfest is behind me, and according to my spouse, I was “giddy” walking in to the fairgrounds. This is truly my favorite time of year in New Orleans. Yes, even more so than Mardi Gras, which I can’t get enough of. The music lover in me just can’t resist seven days of musical greatness. We spent Day 1 with The Soul Rebels, a local brass band that puts on a great show every year, Gary Clark Jr., who was as amazing today as he was at Voodoo Fest a few months ago, and John Mayer, who sounded fantastic but only sang one of his big hits. And he changed it up so much I couldn’t even sing along! (Maybe that was the point.) But the music is only one of many reasons to love Jazzfest. There’s the food…world class Louisiana fare. Really who can resist a meat pie or crawfish bread? There are dozens of talented and mostly local artists who sell their unique and beautiful works from tents throughout the fairgrounds. Yes, I own some new art. And then there are the people, a crazy mix of locals and tourists, hippies and suburbanites, young and old, celebrities and regular folks. You name it, they’re here. People watching actually may be my favorite part of the festival. You really see it all at Jazzfest…some things that make you laugh (the barefoot young man standing in the mud enjoying some of the greatest guitar playing I’ve ever heard live), some that make you cringe (the 50ish lady dancing to John Mayer…think Elaine from Seinfeld), some that make you throw up in your mouth a little (attention guys, some of you should really wear shirts at all times, or at least in public), and some things that make you say, man, I really can’t imagine living anywhere else. Most of my Jazzfest experiences fall into that last category, and that is why I will be back there when the gates open today, listening to some amazing music, eating some terribly unhealthy but oh-so-delicious food, and sharing a love for New Orleans with thousands of people I will never see again. Come join me next year! 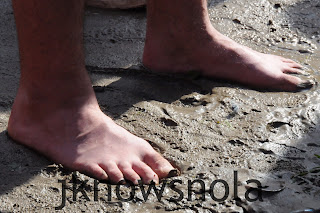 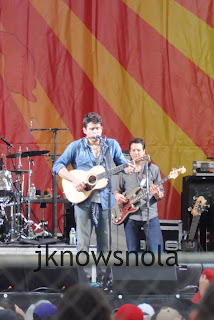 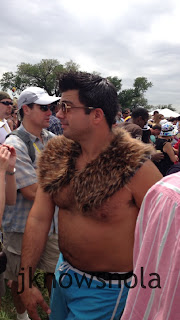 A New Orleanian at Heart
Jazzfest Magic In the Gospel Tent

4 Responses to Jazzfest…It’s Not Just the Music